Unfortunately, this is not an April Fool’s joke.

Central bank strategy, and what we refer to now as “forward guidance” is a never-ending puzzle. In divining future Fed policy we may also need to consider the international ramifications. The three major currency blocs in the free world today are the Japanese yen, the Euro and the US dollar.

For reasons of historical experience, both the Bank of Japanese (BoJ) and European Central Bank (ECB) have been far more reticent to lower interest rates and provide excess liquidity relative to the Fed in the wake of the world-wide financial crisis. But the US has pushed hard for coordination among the central banks to prevent wide exchange rate fluctuations through competitive depreciation of currencies. In the last year, the Fed’s argument has persuaded both the BoJ and now the ECB to provide more credit to their banking systems to stimulate their economies.

One can perceive a general strategic vision here: coordinated devaluation of currencies to reduce debt liabilities and forestall rising unemployment. This makes debt less burdensome while devaluing the real value of assets priced in those currencies. In other words, the bad debts of the financial crisis get absorbed by all the citizens of the world’s most productive economies, hopefully without them noticing. It’s the hidden inflation tax through gradual currency devaluation.

But one wonders who is going to blink first when it comes to tightening up monetary policy in the face of rising prices? The virtue of a stealth devaluation is that the inflation rates are obscured. How many people notice when their dollar  buys fewer European or Asian goods? Of course, financial markets will notice as liquidity flies to the protection of real assets, something that has been occurring  for the past several years (that’s where rising prices in select real estate, farm land, and luxury goods are coming from).

Will the Fed risk rising unemployment to stop perceived inflation? I doubt that will be politically feasible. The BoJ has engineered a swift depreciation of the yen, but one wonders what yen holders have to show for it. And will the ECB tolerate higher inflation or will dollar holders begin to abandon their large dollar reserves in the face of persistent depreciation? Trying to stimulate the real economy by manipulating currency values is a very tricky balancing act.

Janet Yellen should make clear what the central bank will do if inflation exceeds the 2% target rate.

Janet Yellen, like Ben Bernanke before her, believes that the Federal Reserve should communicate the reasons for its current policies and the strategy of its future policy actions. And so we have been told the basic plans are for gradually reducing the volume of large-scale asset purchases, and for keeping short-term interest rates low—”for some time,” as she said in her speech on Monday—in order to stimulate employment and raise the inflation rate toward 2%.

But the Fed’s leaders should also be telling the public and financial markets what they think about the risk that future inflation could rise substantially above the Fed’s 2% target—and what the Fed would do to prevent such inflation or reverse it if that occurs.

Experience shows that inflation can rise very rapidly. The current consumer-price-index inflation rate of 1.1% is similar to the 1.2% average inflation rate in the first half of the 1960s. Inflation then rose quickly to 5.5% at the end of that decade and to 9% five years later. That surge was not due to oil prices, which remained under $3 per barrel until 1973.

Although history teaches that a rapid expansion of the money supply leads eventually to rising inflation, the current inflation risk is not, as many people assume, that the Fed’s policy of quantitative easing has greatly expanded the money supply. Although the commercial banks received trillions of dollars of reserves in exchange for the assets that they sold to the Fed, these reserves were not converted into money balances but were deposited at the Federal Reserve, which now pays interest on such excess reserves. The broad money supply (M2) increased only about 6% in the past year.

The real source of the inflation risk is that the commercial banks can use their enormous deposits at the Fed to start lending when corporate borrowers with good credit ratings are prepared to borrow. That increase in lending to businesses will be welcomed until the economy is back at full employment.

The big question is how the Fed will respond when the lending is excessive and leads to inflationary increases in demand? The Federal Open Market Committee (the central bank’s policy-making body) and Chairwoman Yellen should reassure the public that the Fed will not tolerate high inflation and will take steps to prevent such a recurrence of rising inflation even if that requires allowing the unemployment rate to rise. To be credible they also should tell the public and the financial markets what policies they will use to limit that inflationary lending.

The Fed’s traditional anti-inflation strategy—raising the federal funds rate at which banks lend to each other—won’t work. Commercial banks have so much in excess reserves that they don’t need to borrow from each other.

As an alternative, the Fed could increase the interest rate paid on excess reserves. This would give commercial banks an incentive to keep their excess reserves on deposit at the Fed.

But this policy would create two problems. It would be politically awkward for the Fed to pay large amounts of interest to commercial banks as a way of discouraging them from lending to businesses and households. It would also be a political problem to pay more interest on the $2.5 trillion of excess reserves than the Fed itself earns on its current portfolio of bonds and mortgage-backed securities.

So paying higher interest rates on excess reserves is not a viable strategy for limiting commercial bank lending, especially if the interest rate has to be raised substantially to limit inflationary pressures.

The Fed has been experimenting with repurchase agreements (known as repos) to manage short-term market interest rates. Repos are essentially short-term sales of securities by the Fed—which suck money out of the financial system—with a promise to buy them back at a price that implies the Fed’s desired interest rate. This allows the Fed to deal with a wide range of financial institutions, not just banks but also primary dealers, money-market mutual funds, etc., and to do so in a way that obscures the interest rate that it is paying.

Repos may obscure the implied interest rate, but the repo strategy will not stop the Fed from losing money when it pays more than it earns on its bond portfolio. To be effective in preventing inflation, the Fed will have to push short-term market rates to a high enough level to deter excessive commercial borrowing. And with higher market rates, the banks still will want to lend to commercial borrowers unless the interest rate on excess reserves also rises substantially.

The alternative to interest-rate strategies is quantitative restrictions on bank lending. One way would be to increase required reserves, making it impossible for the commercial banks to use all of their current excess reserves to make loans. The Fed could pay a moderate rate of interest on such newly required reserves, reducing the pain felt by banks on their lost earnings. A different form of quantitative restriction would be to increase substantially the capital requirements imposed on the banks, particularly an increase in the leverage ratio that relates bank capital to all of the bank’s assets rather than a risk-weighted measure of assets.

I am not advocating either of these quantitative restrictions. But I think it is important for the Fed to explain now how it will prevent the banks from using their current short-term reserve assets to finance inflationary commercial lending in the future. If the public is convinced that the Fed is really committed to price stability, it will be less costly in unemployment to prevent or reverse future increases in inflation. 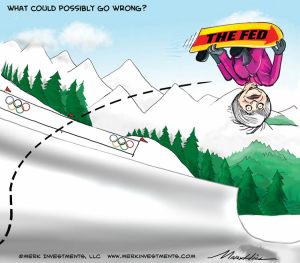