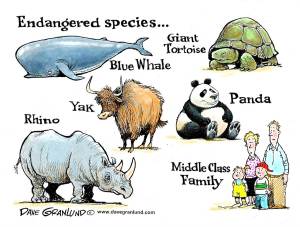 Finally. The WSJ finds somebody who thinks outside the box of economic obsolescence. The constraints on capitalism have been evident for almost 200 years, but the socialists just get it completely backwards: we don’t need state capitalism, we need democratic capitalism. Marx thought nobody should be a capitalist, but the more obvious solution is that if capitalism works, then it must work for everybody. Everybody should be a worker AND a capitalist. How else to survive in a capitalist world?

What’s more, capital accumulation works on the upside and the downside: It empowers people to produce and create wealth while capital assets as savings also protect us from the vicissitudes of a risky, uncertain world, obviating the need for expanding inefficient state entitlement programs.

Capital ownership is not a new idea, but it gets buried under the morass of the neoclassical debate over government vs. business. And in the 21st century the constraints on tax and redistribution and its negative effects on wealth creation should be obvious to all.

Capital for the Masses

‘Capital in the 21st Century,” by French economist Thomas Piketty —its title inviting comparison with Karl Marx’s “Das Kapital”—has electrified the intellectual left in the U.S. since its English publication in March. The book is bold, brilliant and perfectly aligned to the current obsession with economic inequality.

Mr. Piketty argues that, in modern market economies, private returns on capital investment are systematically higher than the rate of growth of income and output, and that the difference explains the increase in inequality. A fortunate few derive their income from capital: Some are celebrity capitalists like Warren Buffett or Bill Gates but most are mere business executives who extract enormous salaries from corporate earnings. Capital returns enable them to accumulate wealth at far higher rates than the mass of men whose wages grow no faster than the economy or their own productivity.

Mr. Piketty believes that capital divergence is natural and inexorable and that the only effective corrective is highly progressive taxes on investment income and wealth, preferably on a global basis to forestall capital flight to low-tax jurisdictions.

“Capital” is a serious work that merits careful consideration and vigorous debate. Indeed the book’s rhapsodic reception is already instructive in an unintended way. For the left that is now extolling “Capital” long ago lost interest in capital ownership, and in recent years ferociously opposed policies for democratizing capital advanced by the right.

That story begins with the 1976 essay of Peter Drucker in the Public Interest (later expanded to a book) on “pension fund socialism.” Drucker observed that the growth of invested pension funds—corporate, union, public employee, professional and individual—had made wage earners the owners of one-third, soon to be one-half, of the equity capital of American industry.

“The U.S., without consciously trying, has ‘socialized’ the economy without ‘nationalizing’ it,” Drucker wrote. Capital investment was better for workers than owning just their own firms because it offered higher returns through trading and diversification—advantages that, Drucker suggested, could be improved with earlier vesting and portability. The corporate income tax, he added, had become exceedingly regressive, because its rate was much higher than that on low-income pensioners—eliminating it, at least for pension holdings, would be a great stroke for income equality.

The left was contemptuous. Writing in the New York Review of Books, Jason Epstein pronounced Drucker’s book “the sort of torpid whimsy that high-price business consultants concoct to amuse their clients.” Hadn’t Drucker noticed that the stock market was flat while the consumer-price index was soaring (this was 1970s stagflation)? Corporations, Mr. Epstein opined, were ripping off poor pensioners just as effectively as the then-notorious New York City politicians who had diverted city pension funds.

In the ensuing decades, academic and think-tank economists, most of them right of center, put forth a succession of proposals for transforming Social Security from a wage-transfer program (from workers to retirees) to one of real capital investment and heritable personal ownership. The aims were to anticipate the retirement of baby boomers, improve on Social Security’s already poor returns on payroll taxes, increase national savings, and promote widespread ownership of productive capital.

President George W. Bush campaigned for personally owned and invested Social Security accounts in 2005. He was crushed by an avalanche of objections from progressive intellectuals, AARP lobbyists and Democratic politicians. The objections ran the gamut from high brokerage fees to consumer confusion to corporate self-dealing. But the central, ultimately decisive argument was that exposing average folks to the vicissitudes of stocks and bonds would be tantamount to shredding the social contract.

“Capital” is a comprehensive refutation of that argument. If returns on capital are as superior to the growth of GDP and wages as Mr. Piketty has found, then short- and medium-term fluctuations are a detail. They can be managed through classic diversification, as practiced by many progressive professors in their own TIAA-CREF accounts. Social Security can be divided into a minimum tax-financed guarantee augmented with personally owned, professionally managed investments like TIAA-CREF’s. Nations such as Chile with capitalized pension systems have employed these and other approaches with little fuss and much success.

Nor do Mr. Piketty’s other concerns help the opponents of capitalized pensions. He believes that corporate insiders often reap large windfalls while outside investors stand helplessly (or ignorantly) by. Yet outsiders have earned much more from corporate investments than from their own wages or Social Security benefits, and pension funds have fueled many efforts to de-feather executive nests. He shows that the earned fortunes of great entrepreneurs become dramatically large over time—but that is due to the value of time and the arithmetic of compounding, which are equally available to the most diminutive capitalist.

Yet Mr. Piketty has no interest in expanding capital ownership: It doesn’t even make his list of inferior alternatives, and he dismisses capitalized pensions with a few uncharacteristic rhetorical slights. Like others on the left, he seems to have concluded that the only way to promote economic equality is confiscatory taxation—redistribution of capital returns rather than wider distribution of capital ownership. After Marx’s idea of comprehensive state ownership of the means of production proved to be hellacious and tyrannical, progressive attentions turned in a different direction. They would leave ownership—with all of its risks and tribulations—alone, and control its rewards through taxation and regulation.

But redistribution of capital returns is easier to describe in a book than to accomplish in practice, even if one sets aside, as Mr. Piketty largely does, the incentive and growth effects of high tax rates. Taxation and regulation are shaped by powerful, conflicting pressures that may democratize capital returns—or, just as easily, may protect and amplify them more than corporate managers could possibly do on their own. The statist intellectual imagines redistributing capital profits while leaving owners with the losses, but the opposite—profits for owners and managers, losses for taxpayers—has been frequently observed in the wild.

That is not Mr. Piketty’s teaching but it shouts from his pages. “Capital” begins with luminous excursions into intellectual history and economic theory, building to a monumental empirical demonstration employing original data laboriously assembled over many years. It then culminates in a proposal for global surveillance and taxation of individual wealth that would astonish a World Federalist. The only hope for social justice in the modern world is utopia: “political integration . . . not within the reach of the nation-states in which earlier social compromises were hammered out.”

Mr. Piketty is a prodigious scholar and likable writer. Here’s hoping that his labors will promote an end that was no part of his intention: to stimulate the progressive left to rethink its hostility to broadening the ownership of capital.

One thought on “People’s Capitalism”