Blogger Ben’s work is already done. In his very first substantive post as a civilian he gave away all the secrets of the monetary temple. The Bernank actually refuted the case for modern central banking in one blog.

In fact, he did it in one paragraph. This one.

Not true, Ben.  Why not ask the author of the 1913 Federal Reserve Act and legendary financial statesman of the first third of the 20th century—–Carter Glass. 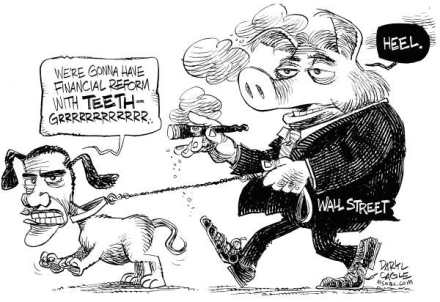 The following is excerpted from an article by Jay Cost:

How about Wall Street reform? Obama likes to pose as a people-versus-the-powerful crusader, but he staffed his administration with friends of the big banks. Unsurprisingly, that has enormously influenced policy.

David Skeel, a professor at the University of Pennsylvania Law School, writes about the framework “that would eventually become the Dodd-Frank legislation,” in particular the resolution rules that enables Treasury to intervene when too-big-to-fail institutions fall into distress.  He explains:

Both the resolution rules and the overall framework read as if they had been written by Timothy Geithner in consultation with the large banks he had worked with as head of the New York Fed. Geithner would get all of the powers that he and former Treasury Secretary Henry Paulson wished they had when they intervened with Bear Stearns, Lehman Brothers, and AIG. But the framework also did not overly ruffle the feathers of the largest financial institutions. There was no call to break them up…While systemically important status might subject the biggest institutions to greater oversight, it also would bring benefits in the marketplace. They could borrow money more cheaply than could smaller competitors, because lenders would assume they would be protected in the event of a collapse, as the creditors of Bear Stearns and AIG were.

The suspicion that the legislation might be a little too accommodating to the largest banks was further aroused by the discovery that David, Polk & Wardell, “a law firm that represents many banks and the financial industry’s lobbying group,” as the New York Times put it…had been deeply involved in the early drafting of the legislation. Treasury had worked from a draft first written by Davis Polk, and the legislation literally had the law firm’s name on it when Treasury submitted it to Congress, thanks to a computer watermark that Treasury had neglected to delete.

That’s not all. In Confidence Men, Ron Suskind reports that Obama instructed Geithner to develop a plan to break up Citi — as a warning to the other banks and a signal to the broader marketplace that the government was in charge, not the banks. But, per Suskind, Geithner disobeyed Obama, and never put together the plan. He suffered no consequences.

The best that can be said about this president and Wall Street is that, when it mattered most, he was a passive observer in his own administration. He allowed shills to write a bill enormously favorable to the biggest interests.

Never has there been a more artificial—-indeed, phony—–gain in the stock market than the 215% eruption orchestrated by the Fed since the post-crisis bottom six years ago today. And the operative word is “orchestrated” because there is nothing fundamental, sustainable, logical or warranted about today’s S&P 500 index at 2080.

In fact, the fundamental financial and economic rot which gave rise to the 672 index bottom on March 9, 2009 has not been ameliorated at all. The US economy remains mired in even more debt, less real productive investment, fewer breadwinner jobs and vastly more destructive financialization and asset price speculation than had been prevalent at the time of the Lehman event in September 2008.

Indeed, embedded in Friday’s allegedly “strong” jobs report is striking proof that the main street economy is the very opposite of bullish. In January 2015 there were still 2 million fewer full-time, full-pay “breadwinner” jobs in the US economy than there were before the crisis in December 2007.