The following is excerpted from an editorial in Barron’s by Thomas Donlan. (Full article Barrons. Subscription req’d)

Central planning that is intended to eliminate chaos eventually creates it. As Friedrich Hayek wrote in The Road to Serfdom, state economic planning is unavoidably arbitrary: “The more the state plans, the more difficult planning becomes for the individual.”

Among many examples of this principle: If a government tweaks money supply to hit targets for interest rates and exchange rates, it will provide stability in those things, but the economy will fluctuate. Or, if the government tries to guarantee general economic growth, as measured by employment, gross domestic product, consumer confidence, business investment, or all of them, rates of interest and exchange will fluctuate. Either way, the economy will be under control of an unstable, unpredictable thing that seeks order instead of liberty, and so can deliver neither.

We should see in the recent market chaos the economic chaos created by planning — not just in China but in the U.S. and Europe, as well. Markets are trying to follow political orders. In China, the government wanted to let markets have more influence over the value of money, until it observed the results and ordered a devaluation. In Europe, the promise to do “whatever it takes” to stabilize a rickety monetary union has perpetuated chaos.

Naturally, markets gyrate under pressure of the sort generated by the president of the New York Federal Reserve. From one side of his desk, he said he still hopes that the Fed will raise interest rates this year, while from the other side, he observed that the case for a rise “seems less compelling.”

The great danger in a market tremor is what people do about it. China, the U.S., and Europe have given too much power to their monetary authorities, relying on central bankers to sail against the winds of economic change. They believe economies respond predictably to tinkering with money markets.

Actually, economies respond to stimuli with booms and to tightening with busts, unless they don’t. As economist Ed Yardeni suggested at midweek, perhaps with tongue in cheek, “Another 2008 crisis is imminent eventually.”

All over the world, there are people who imagine themselves to be masters of the material universe. They are the greatest threat to liberty and prosperity.

I have been arguing for some time that this is how we should understand economic policy over the past 30+ years, often referred to as the Great Moderation. We’ve tried to guarantee economic growth as measured by nominal GDP, interest rates, employment, and price stability as measured by the CPI. The result has caused asset prices such as commodities, exchange rates, real estate, and precious metals to fluctuate quite widely and wildly.

Asset price fluctuations impose their own costs on people, often with arbitrary effects, like when you are forced to buy or sell a house (see chart below). Asset price support by the Fed has also greatly enriched those who own more assets, widening the economic inequality gaps. It is hardly an ideal state of affairs, nor one that can easily be justified on philosophical grounds. 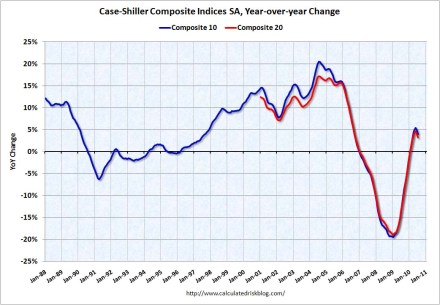