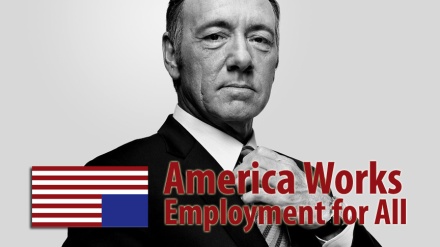 As a political economist and policy analyst I have to say I’ve found the NetFlix series, House of Cards very entertaining. Of course, it is over the top with political sleaze and corruption, something that probably syncs well with the public’s impression of Washington politics these days. (I find it interesting that the writers chose to designate the depraved, murderous POTUS Frank Underwood, played by Kevin Spacey, as a big “D” Democrat. With an annoyingly ambitious, self-righteous wife as co-president – sound familiar? Apparently, depravity with good intentions is somewhat acceptable these days in partisan circles, with Underwood often turning to the audience to explain the bare facts of Machiavellian realpolitik. How unfortunate for poor Niccolo, who was a true republican patriot, but recast by history as the apologist for a ruthless, depraved Prince.)

I have been most amused by Season 3, where Pres. Underwood proposes a massive jobs program paid for by slashing entitlements. This is just too juicy to let pass unnoticed. Let’s translate this “promise” of a full employment Nirvana: “I’m going to take your hard earned money we extorted through Social Security and Medicare taxes and give it away to companies that will employ workers for jobs that the productive private economy will not create because they lose money. Isn’t that grand? We’ll all feel better about humanity, even though we’ll be poorer for it (all except me, that is).”

The irony is that this absurd fiction is actually proposed too often as serious politics in the real Washington D.C. Quite a few other bloggers have explained the surrealness of a POTUS creating jobs from whole cloth just because he can command it from the White House. The numbers just don’t add up. But I was struck more by the widely accepted premise that asserts “jobs” as the end-all of what ails a society of free citizens. The Underwood character actually says, “People are dying from unemployment!” This cuts pretty close to home with Obama recently claiming that “chanting ‘Death to America’ does not create jobs.” Really? Is that what they’re beheading innocents over, a few good jobs?

People don’t die from unemployment, they die from poverty, deprivation, and disease. They die from oppression and violence. Unproductive jobs subsidized by governments do not alleviate poverty, they merely spread poverty around. The thing is, politicians focus on jobs because that is the only way they know how to spread the benefits of capitalism around the population. But we are moving into a new age that departs from the skilled labor-intensive manufacturing of the post-WWII years. Our financial policies have accelerated this trend away from labor by providing cheap capital to take advantage of cheaper labor overseas or machine/robot substitution. We are entering the information, artificial intelligence, and robotics age, and yet our politicians are still making false promises of a job and two chickens in every pot. Not going to happen. We need to think outside that box to discover how we are going to create and share wealth in the new economy. There are many alternative ways to participate in a market economy than solely as a labor input.

In the meantime, enjoy the entertainment. It’s hilarious. But don’t expect a job from America Works.