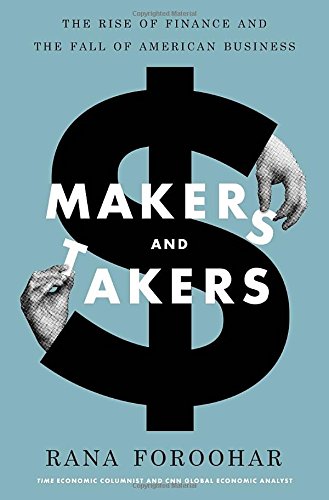 Makers and Takers: The Rise of Finance and the Fall of American Business by Rana Foroohar

Ms. Foroohar does a fine job of journalistic reporting here. She identifies many of the failures of the current economic policy regime that has led to the dominance of the financial industry. She follows the logical progression of central bank credit policy to inflate the banking system, that in turn captures democratic politics and policymaking in a vicious cycle of anti-democratic cronyism.

However, her ability to follow the money and power is not matched by an ability to analyze the true cause and effect and thus misguides her proposed solutions. Typical of a journalistic narrative, she identifies certain “culprits” in this story: the bankers and policymakers who favor them. But the true cause of this failed paradigm of easy credit and debt is found in the central bank and monetary policy.

Since 1971 the Western democracies have operated under a global fiat currency regime, where the value of the currencies are based solely on the full faith and credit of the various governments. In the case of the US$, that represents the taxing power of our Federal government in D.C.

The unfortunate reality, based on polling the American people (and Europeans) on trust in government, is that trust in our governmental institutions has plunged from almost 80% in 1964 to less than 20% today. Our 2016 POTUS campaign reflects this deep mistrust in the status quo and the political direction of the country. For good reason. So, what is the value of a dollar if nobody trusts the government to defend it? How does one invest under that uncertainty? You don’t.

One would hope Ms. Foroohar would ask, how did we get here? The essential cause is cheap excess credit, as has been experienced in financial crises all through history. The collapse of Bretton Woods in 1971, when the US repudiated the dollar gold conversion, called the gold peg, has allowed central banks to fund excessive government spending on cheap credit – exploding our debt obligations to the tune of $19 trillion. There seems to be no end in sight as the Federal Reserve promises to write checks without end.

Why has this caused the complete financialization of the economy? Because real economic growth depends on technology and demographics and cannot keep up with 4-6% per year. So the excess credit goes into asset speculation, mostly currency, commodity, and securities trading. This explosion of trading has amped incentives to develop new financial technologies and instruments to trade. Thus, we have the explosion of derivatives trading, which essentially is trading on trading, ad infinitum. Thus, Wall Street finance has come to be dominated by trading and socialized risk-taking rather than investing and private risk management.

After 2001 the central bank decided housing as an asset class was ripe for a boom, and that’s what we got: a debt-fueled bubble that we’ve merely re-inflated since 2008. There is a fundamental value to a house, and in most regions we have far departed from it.

So much money floating through so few hands naturally ends up in the political arena to influence policy going forward. Thus, not only is democratic politics corrupted, but so are any legal regulatory restraints on banking and finance. The simplistic cure of “More regulation!” is belied by the ease with which the bureaucratic regulatory system is captured by powerful interests.

The true problem is the policy paradigm pushed by the consortium of central banks in Europe, Japan, China, and the US. (The Swiss have resisted, but not out of altruism for the poor savers of the world.) Until monetary/credit policy in the free world becomes tethered and disciplined by something more than the promises of politicians and central bankers, we will continue full-speed off the eventual cliff. But our financial masters see this eventuality as a great buying opportunity. 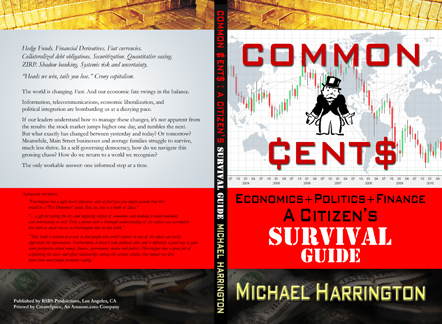